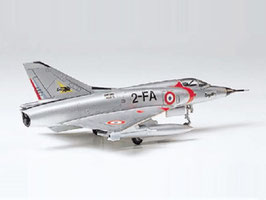 This is a 1/100 scale plastic model assembly kit depicting the 1961 IIIC variant of the delta wing Mirage fighter. The compact scale is a great choice for beginners and veterans alike to work in. The sleek, aerodynamic form that allowed speeds of up to Mach 2.2 is recreated in style. Choose whether to assemble as parked or in flight. Separate parts are included to recreate underbelly missiles and other ordnance.