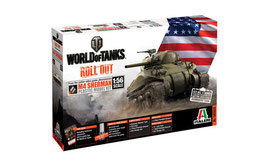 The M4 Sherman medium tank was the backbone of the United States Army during World War II. The M4 is the first and most basic production version of the Sherman line. As many as 49,234 vehicles were produced, including the famous "Easy Eight".

The Sherman first saw combat in North Africa in late 1942 against the Panzer III and Panzer IV. They would go on to be used on all fronts until the War's end. A lack of  firepower and narrow tracks, witch often caused it to get stuck on muddy terrain, were its main weaknesses.