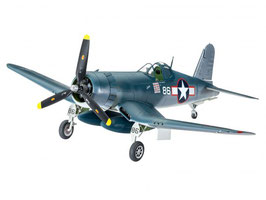 The Corsair is considered one of the best fighter planes in the US Navy in World War II. Feared by the Japanese opponent, who gave her the nickname Whispering Death, she fought in the Pacific theater from 1943 to 1945 and achieved record-breaking successes. The Corsair's concentrated firepower consisted of six 12.7 mm Browning MGs.