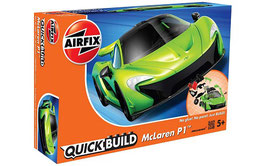 The Mc Laren P1 is a limited production plug-in hybrid sports car produced by British automobile manufacturer Mc Laren Automotive. Sales of the P1 began in the United Kingdom in October 2013 and all 375 units were sold out by November. Production endet in early December 2015.

The pre-coloured pieces simply push together, without glue or paints, to build an impressive model which can then be decorated with the included self-adhesive stickers.